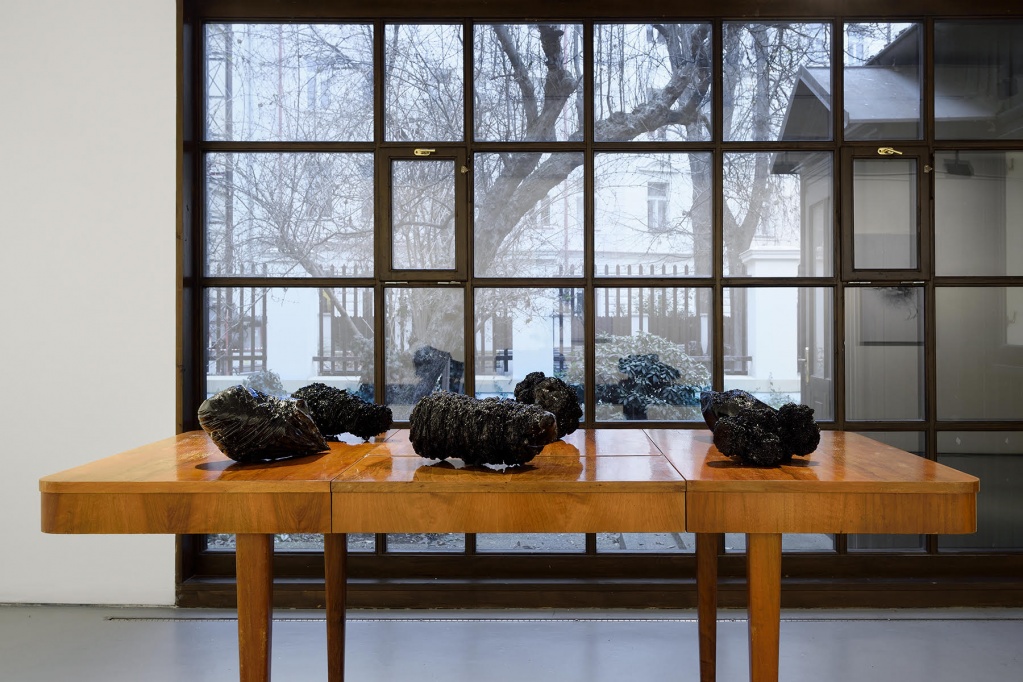 Adam Vačkář has from the start reflected on the condition of post-humanism in the general and probably insurmountable conditions of the neoliberal system.

In a concealed valley, somewhere in the middle of the Forbidden Hills, a dying monk, the last member of an order so ancient that neither he nor the historic documents in the library of the masters reach back to its beginning, with the utmost exertion, drawing on the last of the remaining strength in his shrivelled arm, he reaches towards the little mahogany table at the side of his otherwise humble bedroom. For a moment it seems that his body, tested by the centuries, refuses to perform this basic task. The monk’s perfect mental discipline, however, still has his earthly body firmly under control. And finally, he grabs hold of his iPhone and with slow movements and boundless elegance his fingers literally dance over the screen as he reviews his order in the Amazon Prime application. The order for spare parts that are essential for the operation of the generator of the whole monastery complex has successfully been placed. The quiet beyond the boundaries of civilized imagination is soon disturb by the gentle buzzing of the props of several drones that deliver the crucial components to their destination and the data storage of the ancient secrets remains fully functional for future millennia. The monk exhales for the last time, with a clear conscience, knowing that the message of his order will remain preserved.

With the recent United Nations report on climate change the dystopian vision has officially become our future. Doomsday stopwatches are set at twenty years and their ticking is so loud that you need a considerable dose of pills to get a good night’s sleep. Unfortunately, only a mere 49 per cent, or with momentary good will 51 per cent, of the population, hear that stinging ticking. If sensitive people have until recently reduced the stress by recycling or vegetarianism, now we know that personal initiatives are not enough, that aggressive political collective participation is required. Art has never been far removed from that sensitivity, but its reach remains more or less within a closed elite circle. The information value or, perhaps better said, emotional power of the image is indisputable. An extreme example is the acclaimed BBC documentary series Blue Planet (which premiered in 2001), narrated by Sir David Attenborough, the sequel of which premiered in the autumn of 2017. The whole series was extraordinarily well received, but nothing evoked quite the public reaction as the last six-minute sequence of the final episode drawing attention to the impact of global pollution caused by plastic waste. The shots of a turtle imprisoned in a plastic sack, or a dead albatross whose cut-up body reveals its guts full of bits of consumer plastic, all in the uncompromising literalness of 4K UHD, forcing viewers of the programme around the world to call for changes in the existing approach to the everyday use of plastic products, as if none of them, before having been confronted with the reproduced image of the suffering animal, had ever had reason to be concerned.

In his work, Adam Vačkář has from the start reflected on the condition of post-humanism in the general and probably insurmountable conditions of the neoliberal system. The ties between the organic and the industrial, which every day shift further towards organic industry, constitute the backbone of his photographic and installation work. In his hands, the found bits of woody plants covered in lichen and moss change into elastic forms resembling prefabricated products. The differences between a plastic bottle and bit of woody plant vanish. A stone can be a drone and potable water crude oil. Everything in their aesthetics corresponds to the high standards of an advertising photo or product design. His poetic criticism – if you are in sync with the stinging ticking all around – can sometimes even seem too literal. Yet it is still dominated by the artful process of making facts visible and putting further strains on antagonisms that to many people are invisible.

As we know from reading countless critiques of the contemporary political and economic status quo, it is easier to imagine the end of the world than the fall of rapacious capitalism. Similarly, it is clear to us that no matter how critical we may be, we are always an inseparable part of what we are attacking. This is something Adam has repeatedly emphasized in his work, for example, in his performances, when he puts himself, as an artist, in a shop window of a department store, or with his stable use of the visual language of the global market, stripped of actual advertising or propagandistic rhetoric and thus converted to the abstraction of the apparently glorified ruins of our civilization.

The vision of the last monk, who devotedly leaves his legacy of countless preceding generations to digital emptiness, or the possible future AI, may seem like another generic sci-fi story or a metaphor of our future. It depends on the point of view. Bad Seeds are sown, and no one knows how to get rid of their fruits.