Handbook to the Stars 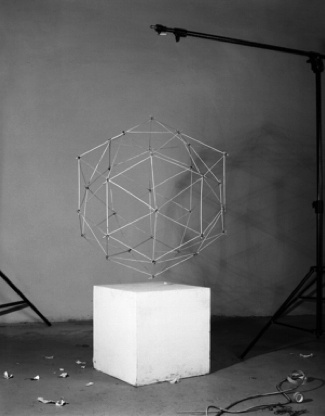 Until recently only a small circle of people in the Czech Republic, who were of an artistic orientation similar to his, were aware of the work of the Hungarian photographer Peter Puklus.

Until recently only a small circle of people in the Czech Republic, who were of an artistic orientation similar to his, were aware of the work of the Hungarian photographer Peter Puklus. Things were different in Slovakia, however, where Puklus had twice been an artist in residence at the invitation of the BANSKÁ ST A NICA arts initiative in Banská Štiavnica. The result of his first sojourn, the book Handbook to the Stars (Příručka ke hvězdám), became a milestone in his career. It is to be welcomed that it was by means of this book (and the similarly named set of exhibited works) that we are now becoming acquainted with his approach to photography.

Like a number of other visual artists, Puklus does not consider himself to be photographer in the traditional sense of the word. Rather, he sees himself as an artist who uses photography. In the book Handbook to the Stars and in the exhibited set of the same name, he operates with photos of a wide range of genres, including urban exteriors, architectural details, interiors of flats, arranged still lifes, and photographs of works of sculpture and other ‘objects’. What is important in them is the repeated allusions to work with sculpture and objects. No less important is the three ways in which he presents the photographs. He exhibits several of them separately, in standard frames and under glass. The exhibition, however, also includes a bound book, in which the photos, especially those whose fragments appear on several pages, refer to the fact that the set is a kind of large puzzle that goes beyond the format and sections of the publication. The last, but fundamental, form of the presentation of his photos is a tableau on the wall, in which he presents all 32 double pages from the book arranged as a single whole. What stand out in it are the meticulous graphic design of the book and, indeed mainly, the inner logic of the whole constellation, consisting in the linkage between the photos, which the author follows and interprets. Perception is set in motion along any course of the pictorial microcosm, led by the relationships between the juxtaposed photos. A link is actively generated between apparently heterogeneous pictures. The three modes of presenting the set [Záložka] , amongst which is wedged a borrowed work of sculpture, can reasonably be considered three suggestions for discerning the connections amongst the photographic images and demonstrating the differences in the reception of each of them. Three times with the same things, each time differently, but also with a productive mutual tension amongst them. Drawn into the quotation at the beginning of this article is the Handbook to the Stars a kind of teleport, which moves us from suggestive and sometimes mysterious, but always perfectly executed pictures, to the question of the influence of their arrangements on the typology of ‘stories’ that we create in our minds when looking at them.

Peter Puklus is an artist currently living and working in Budapest, Hungary. He studied photography at the Moholy-Nagy University of Art and Design, Budapest (MOME)and new media design at the École National Supérieur de Création Industrielle(ENSCI)in Paris. He is about to finish his DLA (Doctor of Liberal Arts) studies in photography at MOME.