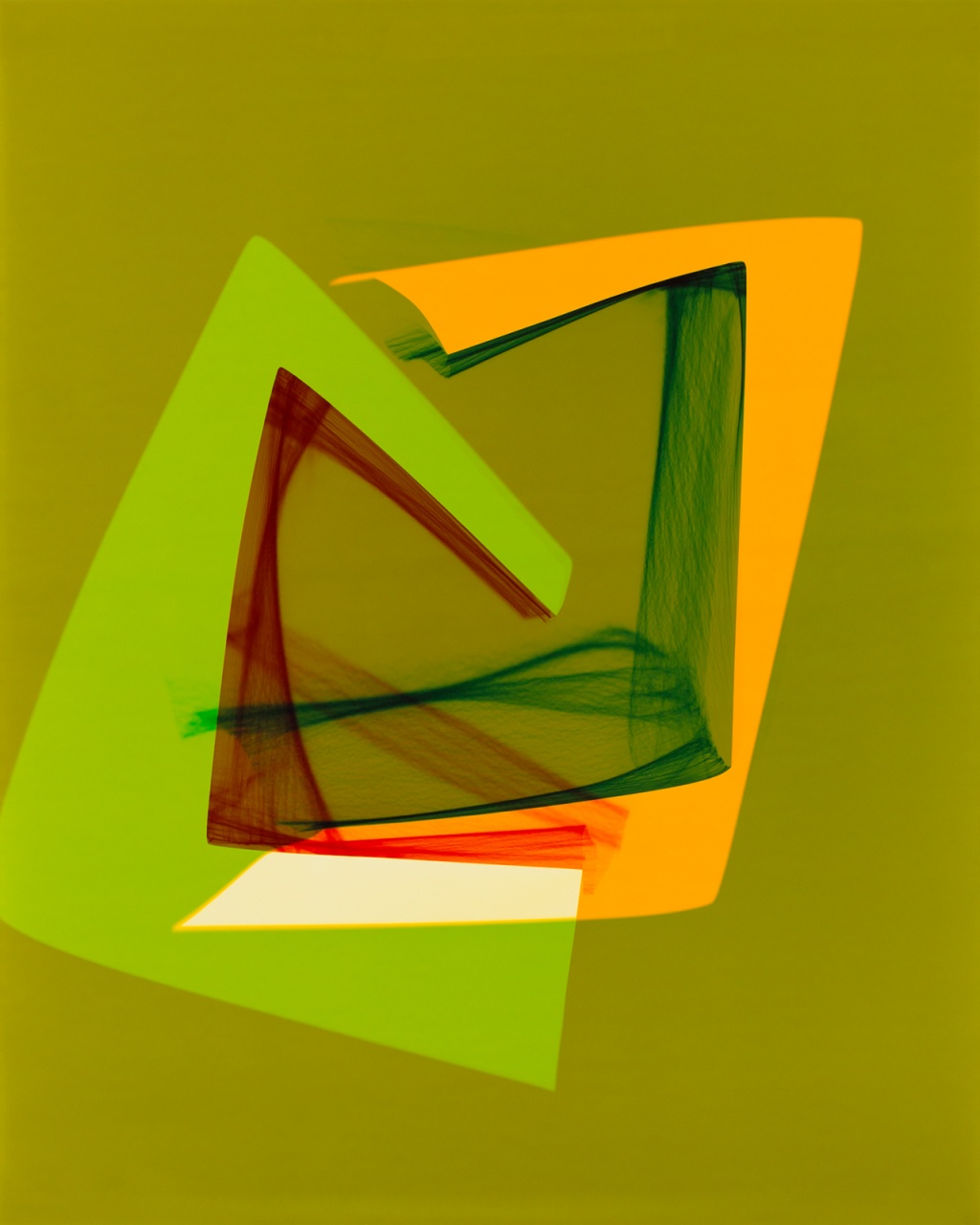 In David Miller’s chromatic universe, light and photosensitive paper are the only things we see. At once subject and object, the artists’ prints insist that their silent form speak to the most immaterial of interactions. This is why two prints are display

Photograms are basic to photography. It is reasonable to see them as the building blocks upon which the institution of photography stands. Although the photogram claims a unique place in the history of the medium, a distinctiveness that enables new forms of depiction, the method of capturing light and shadow on photosensitive material is akin to that of traditionally made photographs, though with a photogram the camera is omitted from the image forming process. Also, as with camera-derived images, the result is a trace of reality, a former presence. Paradoxically, however, it is probably simpler with photograms than with other photographs to achieve an image of timelessness—thanks to the way in which even commonplace things become transformed into light infused abstractions. Though some painters in the nineteenth century complained that the invention of photography heralded the end of their art, precisely the opposite took place. Photography opened art to new discursive spaces. And the photogram opened photography to art.
An analogy in the graphic arts is the calligram or typogram. Made with a manual typewriter, letterforms and their varied combinations are inscribed, hammer struck upon a paper’s surface. The ensuing visual structures are based on the alphabet. Similarly, a photogram necessarily results from physical interactions, between, for example (and unlike the typogram), virtually anything under the sun. Though the most famous inventor of the cameraless photograph is William Henry Fox Talbot, photograms as art typically link back to Christian Schad, Man Ray, László Moholy-Nagy and others of the early avant-garde. In Bohemia, Jaromír Funke and Jaroslav Rössler made photograms. Rössler often used only paper cut outs for his compositions. While David Miller’s works are a conceptual and material homage to this tradition, each paired set references their own making.
In David Miller’s chromatic universe, light and photosensitive paper are the only things we see. At once subject and object, the artists’ prints insist that their silent form speak to the most immaterial of interactions. This is why two prints are displayed side by side. Mutually interdependent, two photosensitive sheets rely on each other’s agency for their unique characteristics. The two sheets play with each other and with light; a blind dance. The artist works in complete darkness, even without the dim red light found in black and white darkrooms. He stands a fresh sheet upon its flat, horizontally laid counterpart. The object ensemble is exposed simultaneously; two images are made. Miller uses light, chemicals and light sensitive paper but does, he says, to “upset, coax the invisible, the unrepresentable relations inside every photograph”.
With his exhibition in Josef Sudek’s former studio, the question David Miller seems to be asking is, how can the photographic reflect its own condition while simultaneously representing subjects other than itself? If we admit that the photogramists’ work is often closer to the work of painters, graphic artists, sculptors and visionaries than it is of photographers, what then can we read in Miller’s writing of light?  Despite the freedom of choice that photogramists’ exercise, ultimately they are twins, light and shadow, just as Her Majesty Photography is wed to art.