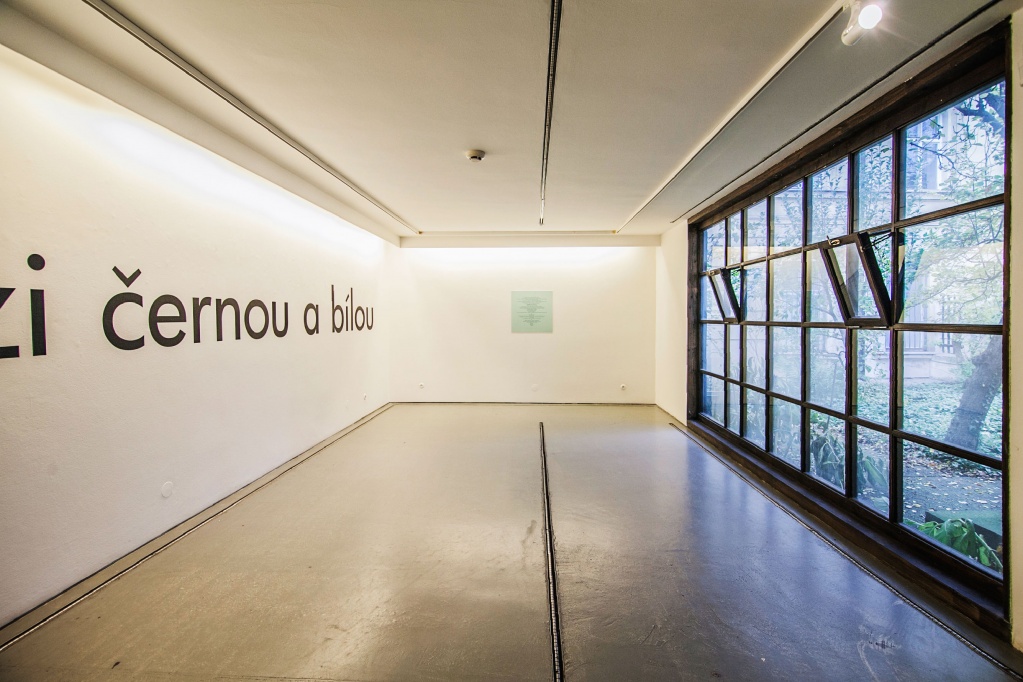 Two conceptual artists, long exploring the potential of text, have entered the Sudek Studio in Újezd street, a place that evokes the life and works of the legendary photographer Josef Sudek.

Two conceptual artists, long exploring the potential of text, have entered the Sudek Studio in Újezd street, a place that evokes the life and works of the legendary photographer Josef Sudek. And it is not only text that they have been exploring. In a project entitled ‘Škála’ (Range or scale), Jiří Valoch (b. 1946) and Lenka Vítková (b. 1975) have been working together in a continuously expanding visual field, the space between signs and images. The name of the exhibition refers to the black-and-white, potentially coloured visuality of photography and to the original use of today’s gallery space as a studio, a kind of laboratory.

Typical of both Jiří Valoch and Lenka Vítková, who work in situ with text, is the close linking of artistic, curatorial, and theoretical work, which in itself considerably expands the potential field of interpretation of the emerging dialogue. Here, text is therefore not only text; it is also part of a larger semantic and visual set. It completes the appearance of the place, and by means of it a completely new space emerges, in which one can contemplate photography without it needing to be depicted, for it is present simply by being thought about. Both texts could stand on their own, but together they have entered the well-established context of a place, the Sudek Studio, and they relate to the way of seeing and reading the studio. They therefore consciously relate to the visuality of photography. Text, here, is not a caption. It is an agent that calls forth what can be seen and in a way determines it. Both texts are not clearly defined or finished.

One text relates to another
An artist, poet, curator, critic, musician, and collector, Jiří Valoch is still an imaginary moving point in the network of current thinking about art. He is a rare figure, who exists in a context that he himself has long been actively creating and experimentally and theoretically expanding. It is not easy for me to focus on a mere segment of his art and to extract it from the compact whole. That is why I wish to recall his early works, where the text overlaps with the photograph (or with a section of the image generally). This fact was the impulse for choosing a place to hold the joint exhibition Range. It was mainly Valoch’s Body Poems (Tělové básně; for example, Love, 1970, and Merde, 1971) and parallel text interventions in a landscape (Dream, 1970), whose fleetingness was recorded by the camera. In those days, the photographs were black-and-white. Rather than accompany the image as a caption or instructions, the text was its integral part, indeed the part that carried the load. To put it metaphorically, here, with Sudek, Valoch’s text again enters the ‘body and landscape of the Josef Sudek Studio’ when one looks through it, and it becomes both a picture inside and a part of the garden outside. Three words underscore the Zen atmosphere of this place in the courtyard, the magic of the gazebo in the garden, seen and concealed at the same time.

Three words, like a kōan.
To the text, which is a picture and a seal.
An impression about the ability to add colour to a black-and-white vision.

Tone.
Like Jiří Valoch, Lenka Vítková has a remarkable scope and sensitivity of perception and expression, although she belongs to another, much younger generation. She is an artist of the post-conceptual context, stripped of the carefully declared barriers between media. Her works with text, like Valoch’s, do not compete with images. On the contrary, as fragments, the more or less rhythmic texts and pictures originate in the neutral milieu of the monitor, the paper, the canvas, or the wall. For Vítková, painting, text, photograph, and song are possibilities, inconspicuous little challenges, ways to link one’s surroundings to one’s intimate thoughts about art. I invited Lenka Vítková to the Sudek Studio on the basis of a strong impression from the exhibition They Were Standing and Waiting (Stály a čekaly) at the NoD experimental venue, where her texts and pictures communicated together subtly, yet intensively demanding my attention, and not only mine. Nor can I forget her levitating texts/quotations, which, as if in passing, entered into an independent ‘monologue bordering on a dialogue’ with Alena Kotzmannová’s photographs in the Olive in a Martini exhibition.

The textual, rhythmic, and almost musical series Radio Salt (2010), presented as a set of nine black-and-white photographs of a textual set that is several pages long, was what made me decide to invite Lenka Vítková and Jiří Valoch together to the Sudek Studio, so that here, as part of the Fotograf Festival / Between the Signs, they could together contemplate photography and, more generally, visuality.

Two texts were made.

Katarína Uhlířová
Curator of the exhibition

representation in galleries and collections