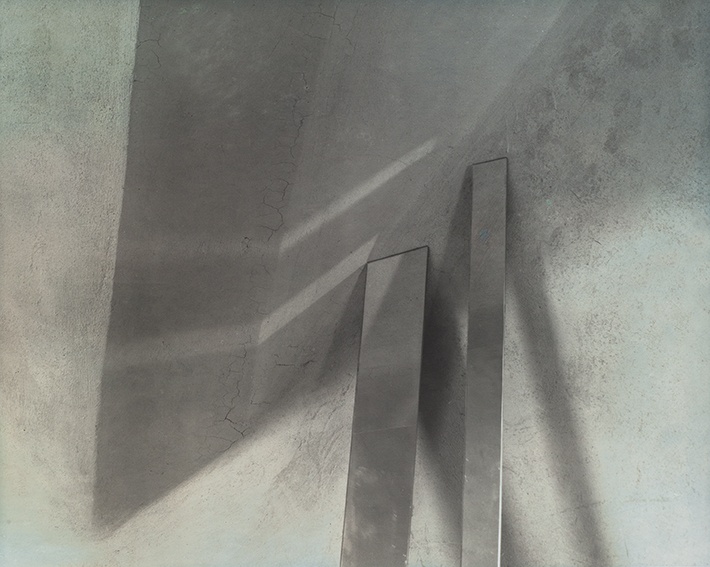 If we tried to imagine Pavel Baňka’s creative life as a photograph, its inherently transient nature would probably show very soon. There would be a steady stream of portraits, staged figurative actions, spaces artificially created by the artist himself.

If we tried to imagine Pavel Baňka’s creative life as a photograph, its inherently transient nature would probably show very soon. There would be a steady stream of portraits, staged figurative actions, spaces artificially created by the artist himself, images verging on the abstract, as well as landscapes and interiors with a spiritual dimension. Such an imaginary picture would then suggest a host of frameworks within which Baňka’s work might be arranged, based on various inner and external criteria just as the motive of the frame itself keeps recurring throughout Baňka’s work. A biographical angle would show that ever since his beginnings as a self-taught photographer, Baňka has retained his determination to search and invent, thus keeping at bay any danger of artistic stagnation, while always putting new approaches to the test. Within the framework of Czech photography, Baňka’s place would be somewhere behind the founding father figure of Josef Sudek, whom he also references in his early works, and alongside Jan Svoboda, with whom he also shares an interest in the work of renowned Czech glass and jewellery artists. In Baňka’s nudes and some of the portraits, we can also find traces of another giant of Czech photography, František Drtikol. Just as with Drtikol, Baňka’s main objective is not creating a mere image of the subject, but rather constructing a photographic picture, where the photographed figure or face act only as a fully integrated, yet at the same time provocative, part of the whole
Another framework is constructed virtually from within, and it delineates the various periods or areas of interest within Baňka’s work. The monograph which is being put together and which focuses (mainly) on Baňka’s early work is divided into three such areas, entitled Construction, Figuration, and Abstraction. The title Construction refers to the way an image is constructed by light. Baňka photographs panels of mirrors placed in a landscape, he opens windows, thus reflecting and focusing the view into the interior. The mechanisms of light shining through or being reflected, as captured in Baňka’s photographs, refine both the vision and the awareness of space. [Reality here is recorded and at the same time created.] In his kinetic, phased figurative pictures, Baňka’s wife, his daughter, and he himself then become the protagonists of a few-second-long photographic actions: a simple movement creates a sequence, interconnecting personal and general levels. Other photographs play out almost on the surface so to speak. The term Abstraction is not used to suggest the notion that images lose their descriptiveness; rather they shed the shackles of exact contours, becoming blurry and gaining evocativeness. In his experiments with exposure length, the immediate moment of a picture being taken is enriched by the time frame of the past as well as of the possible, just as Baňka himself seems to suggest when he speaks of recollections and imaginations. As Anne Wilkes Tucker puts it, ‘each one of Baňka’s photographs simultaneously facilitates recognition while undermining the faithfulness of the medium.’ This curator of photography at the Museum of Fine Arts Houston, known for, among other things, her book about Czech modernism and an exhibition of Czech avant-garde photography, looks at Baňka’s work in a contribution to the catalogue accompanying his Infinity exhibition at the Rudolfinum, Prague. In the essay, entitled ‘Pavel Baňka – Haunting Duality’, she describes her experience of Baňka’s photographs:
‘In 1985, Pavel Baňka’s photographs reached viewers in the United States through an issue of the German magazine Album. Perhaps this is where I first saw the memorable photograph of the reclining nude with a thin metal wire arching from her navel to a metal band on her forehead. With her eyes closed and her back arched, she seems to be in a trance or in ecstasy. The wire and the light behind her suggest a field of energy radiating from the curving terrain of her body. In this image, and in other pictures in this series, where Baňka collaborated with Czech jewellery artist Vratislav K. Novák, the human body serves as a stage for enigmatic dramas. (...)’ And in another article, she comments on his early, constructed photographs: ‘Throughout his career, Baňka’s photographic series have alternated between imagined and found Spiritual Spaces (…) In a series titled Doubts, Baňka more actively imposes his vision by selectively placing long narrowed panels of glass and mirrors in rooms that are without furniture or people. The plain domestic spaces are deconstructed by conflicting sources of light and shadow and by the vertical bands of reflections created by the mirrors and glass that slice through the interiors. Images of trees and plants from the exterior enter the interior; perspectives shift, and solid surfaces are dissolved by the light flickering across walls and floors.’
These early pictures are fascinating and beautiful, and as with Baňka’s other early photographic series, the photographer’s hand in their invention is clear.

*1941-03-20 , Prague
He graduated from the Czech University of Technology in 1963. From 1964 to 1966 he was, together with Václav Hrabě, Inka Machulková, and Vlaďka Čerepková, a member of a Czech beatnik group. He has devoted himself to photography since the 1970s, when he quit his job as a research worker and began his career as a free-lance art photographer. He has worked for the periodicals Domov (Home), Bydlení (Living), and Československý architekt (Czechoslovak Architect), but since the early 1990s has devoted himself exclusively to non-commercial photography. Of particular importance to him are his long stays in the USA, where he has sojourned several times as a visiting artist and a visiting lecturer at various universities. In the States his works have been shown in important galleries in Chicago, San Francisco, Los Angeles, and, most recently, New York City. In 1995 he was appointed the head of the Photography Studio at the Faculty of Art and Design, Purkyně University, Ústí nad Labem. In 2002 he helped to start up Fotograf magazine, of which he has been Editor-in-Chief ever since. In 2005 he was made a Visiting Professor at the University of Derby, Great Britain, for three years. In 2009, together with other colleagues from Fotograf magazine, he established the Fotograf Gallery, primarily for young photographers. Baňka lives and works mainly in Prague.