The Charm of the Still Life 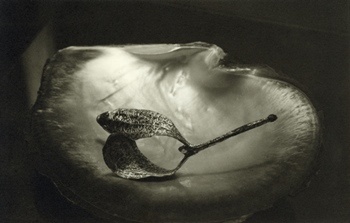 The exhibits from probably the largest private collection of Czech photographs differ from each other both in their intention and in their conception.

We generally understand the Golden Age of the still life to be the sixteenth and seventeenth centuries, particularly in the Netherlands. But twentieth-century modern art also paid exceptional attention to the still life. It could even seem that the extraordinary depiction of ordinary things became the focus of European fine art. That presented a great challenge also to photography.

The refined arrangement of objects, sometimes details of themes defined by contemporary tastes, provides evidence of a demanding vision or of the artist’s imagination and mastery of his or her medium. In a very practical way and with clear purpose of mind, the photographer Josef Sudek sought to match his means of expression with those of painters, particularly Emil Filla. Sudek sought to make still lifes that were undeniably distinctive, photogenic. ‘I looked at things not in painterly way, but in a photographic way’, he concluded simply. Sometimes, however, he admitted that the road to the final destination was long.

In photographed still lifes, as well as in painted ones, we can observe the modelling of relationships between the selected objects, both to themselves and to the delimited space, refracted light and transitions of tonalities – in short, the experience of beauty. The topic of the still life, however, is not only aesthetic. At the very least, it assesses the principle of the ‘part standing for the whole’. In a slice of life, the echo of grasping the fullness of life on earth is then perceived, in other words, it is an illustration of perceiving the world in general. Except that contemporary photography encounters the legacy of the Baroque fullness of content only in rare works of traditionalists, whose patron saint remains Josef Sudek, the indirect host of the current exhibition.

Sudek’s having lost an arm in the First World War underlines the dual nature of materiality and spirituality. If his photographs strip objects of their tangible dimensions, do they, on principle, aim beyond the physical aspects of their subject matter? Theoretically, yes. After all, not even matter-of-fact shots show things as such or things in themselves. They offer their projections – shadows and reflections. But is that enough? If it is, then what for? Can the terrestrial nature of cognition by means of sensory perception still lead us to glimpse extraterrestrial things? In what circumstances can we believe in a metaphysical plan of the universe? And how intensely?

In a world of explosive contradictions, the apostles of Dadaism and the interwar Avant-gardes already rejected harmonizing illusions. The early Tristan Tzara came out of anti-artistic positions, and Marcel Duchamp, the pioneer of installations of ready-mades, also sought to make gestures subverting art. It was André Breton who, in the name of the Surrealists, gave his blessing to the elevation of found objects and objects of everyday use to the level of art. He thus marked out a special photographic trend that had a tenacious echo on the Czech scene, no matter how much this trend declined in the long run as result of the exhaustion of poetic transformation by the original Surrealists. The precision of the record excludes decorative function, and does not resonate much with the viewers. The registration of randomness can hardly substitute for meaningfully built relationships between objects in classic still lifes, which symbolized the music of the spheres. Not only the past, but the present too is ready to appreciate the confluences of contents, personal and collective, temporal and eternal, material and spiritual.

The exhibits from probably the largest private collection of Czech photographs differ from each other both in their intention and in their conception. In consequence, they cannot be placed together in a uniform current. But that is not a bad thing. Indeed, the examples from the collection of the PPF Group – by Ladislav Emil Berka, Jaroslav Rössler, Jaromír Funke, Adolf Novák, Václav Chochola, Emila Medková, Jan Lauschmann, Jan Svoboda, Ivan Pinkava, Alena Kotzmannová, Radek Brousil, Jiří Thýn, Johana Pošová, Michal Ureš, and Josef Sudek – are fascinating because of the diversity of approaches taken to the same genre.