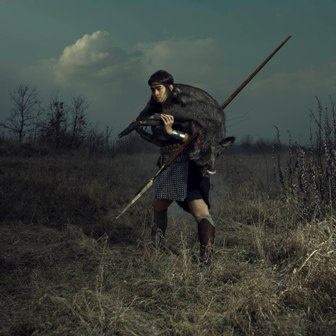 Researching stereotypes conditioned by history is carried out in probably all fields today.

Researching stereotypes conditioned by history is carried out in probably all fields today. With increasing obviousness global processes are wiping away ethnic boundaries that have been in place for centuries, and are transforming former conceptions of national identities. Multiculturalism has contributed to the contemporary ethos of culture mainly by focusing on the dynamic of relations, criticism of their asymmetry, and unmasking monocultural tendencies. National Awakening, a new set of portrait photographs by Salim Issa and Štěpánka Stein follow on from their previous projects on ethnic minorities in the Czech Republic, particularly the Vietnamese. With a title that is politically and nationally loaded, this set of works, with a certain irony, revives the perspective of traditional nineteenth-century academic representation. By paraphrasing iconic figures of the mythology of the Czech National Awakening, the artists point to a changing context, offering for reflection nationalist formulae and demarcating the force fields between the period of the struggle for national identity and the continual need for redefinition in a continuously changing world.

Living and working in the Czech Republic, this artist-couple concentrate on subjective documentary photography and fashion photography and also on photographing the works of Czech designers and architects. In the past they made various conceptual series (Beauty Fashion, Mimolimit, Space Cowboys), and in 2005 they completed a project funded by a grant from the City of Prague on the topic of the Prague district of Karlín. Their works were chosen by the renowned German publisher Taschen for a book called Best Portfolios (2005). In 2006 they published their first book, The National Theatre/Národní divadlo, a series of portraits capturing the atmosphere of the foremost Czech theatre. In 2007, they carried out a project for UniCredit Bank, to present at the Venice Biennale. Since 2008 they have been made magazine covers for Hospodařské noviny, a leading Czech business newspaper.