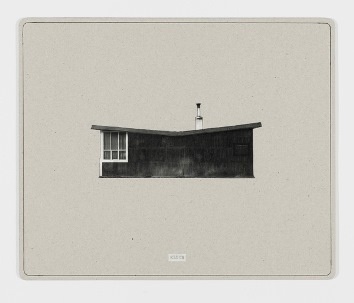 After a pause of five years, the creative ensemble kunstWerk is re-emerging from the hermitage of quiet weekends to instal their cabinet of concentration, labour, and good cheer, this time in the Josef Sudek Studio, Újezd, Prague.

Expulsion as a Method
A certain type of choking occurs in the unfortunate collision of two activities taking place at roughly the same place and time, that is, breathing and eating. Just as when two motor cars collide in a small intersection and none of them can continue on, so too in the first case both activities suddenly cease. Whereas to suddenly stop eating does not kill the person at that very moment, things are worse when one suddenly stops breathing. One can refrain from eating for a long time, but one can refrain from breathing for only a woefully short period. Just as mind always triumphs over matter, so too does breath, considering its importance, triumph over a piece of food. And thus the morsel, aware of its being eternal of secondary importance, spitefully performs the work of the Devil. If, however, at that fatal moment, the humiliating victory of the morsel is not to take place, a method that will expel the matter must be used. If it happens thus, and it is expelled, a fundamental transformation of the piece of the food takes place by this act. The morsel will never again be food. The creative ensemble kunstWerk also uses this simple method of transformation in its work. It is fair to say that it is always ultimately a matter of metamorphosed expelled things. Without exception we here encounter initial scenes and objects, which are generally known and easy to recognize; we are not facing something unknown; on the contrary, we are facing profane mandatory obviousness and platitude, and the recognized nature of the initial elements is almost ‘stifling’ and extremely unartistic. Though methodologically primitive in its aims, the subsequent manoeuvre energetically casts doubt on those elements, both at the level of the visible and at the level of the content. The manoeuvre is performed unequivocally for their preservation. It therefore makes double sense that kunstWerk found refuge in the area of cottages – physically and semantically. The cottage is a product of the expulsion of civilization (or at least urbanization) from its own superabundance. It emerged from ‘choking’. It is a house that has been vomited out, yet it is not a house. It is a being expelled into nature and for that very reason is not a being in nature. The cottage is a purely lived creation, but is not art. What the devil, then, is it?! Truly, perhaps, it is a mass transformer of the heaviness of matter into the energy of spirit.
Dr Ludwig Hirsch
Show moreShow less

KunstWerk, a creative ensemble, established after roughly twenty years of collaboration between its founding members in 2000, has continued in a more or less unchanged form ever since. kunstWerk comprises two founding members, one member in memoriam, and a variable number of external members. Apart from their own creative activity in the field of the fine arts, they also devote themselves to curatorial work and research in the field of theory. The members of kW are also concerned with the spiritual rebirth of society, and were present at the creation of the Sekula cottagers’ church, where they devote themselves to missionary and pastoral work.